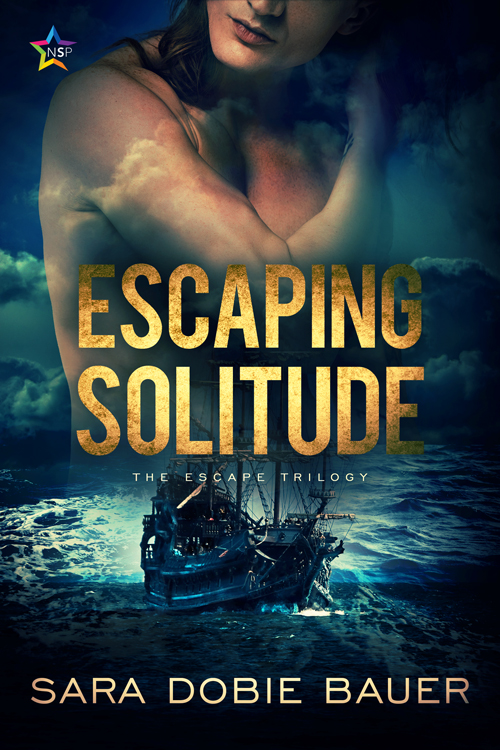 What readers are saying …

“While some middles of trilogies drag, I enjoyed this story even more than the first one! Andrew and Edmund, and their relationship with each other, continue to delight. Bauer strikes the perfect balance between erotica and excellent plotting.” – JL Gribble, author of The Steel Empires Series

“The second book in Sara’s Escape series takes her vampire and his sailor to their inevitable home base: New Orleans. The comparison to Interview is unavoidable, so let’s say this series is like if Lestat could actually get it up, and if Louis weren’t such a damned mope.” – Kim Alexander, author of the paranormal romance Pure

Desperate to stay by Andrew’s side forever, Edmund examines the impressive coven library in search of an Elder, the only creature capable of turning Edmund. Although missing for centuries, Andrew believes an Elder must still survive somewhere; they just have to find him.

The search is put on hold when Edmund receives word that his mother is ill in London, and the lovers set off on an oceanic journey surrounded by new friends and old enemies. When things go terribly wrong, Edmund’s fragile human life hangs in the balance, and an Elder must be found or Andrew will be alone forever.

An excerpt from Escaping Solitude …

It’s hard to not focus on Edmund’s bare skin as he drinks straight from the water jug before wiping his face with the back of his hand. The long, angry scar on his back dances in the moonlight, and the bandage on his arm glows white. I suppose it’s my fault he earned a new scar during our time on the island. His blood was a gift to me that managed to save his life.

He rubs at his shoulder as though sore. “My body is confused,” he says.

He laughs, and the sight of his lean stomach contracting has me half hard already. He flops into bed on his belly. “Do you even listen when I talk?”

I run my fingers through his dark hair. It’s shorter now than when we first met. “I love listening to you talk.”

“I’ve spent years living at sea. When I wasn’t busy playing sailor on deck, I walked through wild forests and fought cannibals and pirates. Now, I’m here in this bloody posh hotel, eating pastries all day—”

“And, if we’re not careful, I’m going to end up fat and lazy like all the other British dukes.” Edmund’s eyes go wide in the darkness. “Jesus, Andrew, I have to write my mother! She might think me mad, but she doesn’t want me dead. And the trading company. Their ship is at the bottom of the sea!”

I tackle him and put my hand over his mouth. “Quiet. Are you trying to wake the entire hotel? It’s nowhere close to morning yet. Your letter writing will have to wait.”

He mumbles against my skin.

“What was that?” I pull my hand away.

“Are we going to see the city in the morning?”

“Yes. I have plans.” I think of my tailor, Peters…and a possible nocturnal enticement.

Edmund’s callused palms run up the sides of my biceps. “I’ll have to pretend I don’t adore you, won’t I? Out in the city. Two men together is frowned upon. I won’t be able to do this…” He cups my head in his hands and pulls me closer until his open mouth finds mine. He sucks on my tongue until I grind against his hip.

I pull away and press my forehead to his. “Will I ever stop wanting you?”