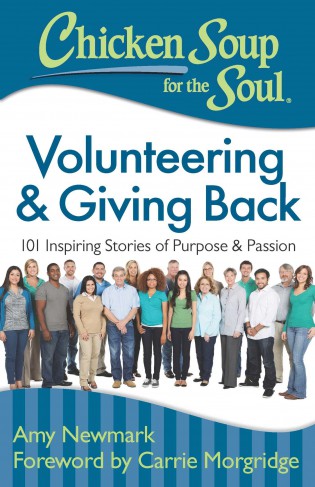 As many of you know, a big part of my life in Arizona was prison ministry, but I wasn’t peddling religion; I brought books behind bars. For three years, I was honored to be a Gina’s Team book club volunteer at Perryville Prison. I wrote about the experience sparingly, but thanks to writer friend Beth Cato, I eventually sent something about Perryville to Chicken Soup for the Soul.

Miraculously, it was accepted, which was amazing to me, since my short fiction usually revolves around sex, violence, or romantic, gay cannibals.

Tomorrow, Chicken Soup releases its most recent collection, Volunteering & Giving Back, in which my essay, “Hope in Orange,” is among many featured pieces. I suggest you buy the edition, not only for my work, but for the inspirational stories of so many others doing good out there in the dark, scary world.

For your reading pleasure, you’ll find an excerpt below. Read it and head to Amazon and order your copy of Volunteering & Giving Back. Then, do one better: find some way to get involved in your community. Find a way to make a difference. It’s worth it, and if you’re doing it right, you’ll soon realize the people you help are actually helping you. This essay is wholeheartedly dedicated to the women in orange of Perryville Prison.

(Featured in its entirety in Chicken Soup for the Soul.)

Perryville Prison is located on the outskirts of Phoenix, Arizona. Surrounded by desolation—dried desert and mountains of dirt—the prison could be hell, except people don’t leave hell whereas they do leave Perryville. And often return.

I don’t believe in ghosts, but I do believe Perryville Prison is haunted by the women themselves. The ghosts of the past surround their heads like teased hair, and I see reflections of loved ones in the edges of their eyes.

Dear friend Sue Ellen Allen harassed me (in a good way) for a year before I finally agreed to volunteer at Perryville. Sue Ellen, an ex-con herself, started a book club during her lengthy tenure at Perryville, and what better place for a writer like me than a book club?

Why the initial hesitation? Was it because my father was once a parole officer? No, although he wasn’t thrilled at the prospect of his daughter working with ex-cons. Was it because I don’t like to volunteer? No. The main reason I didn’t want to volunteer at Perryville Prison was because I was scared.

I had visions of Con Air. I just knew I would end up running from some Steve Buscemi freak show. Or maybe end up murdered. Or kidnapped. Something. Because to an outsider, that’s what prison is—a dark, scary place filled with hardened criminals who know how to turn a toothbrush into a lethal weapon. Was I wrong? Of course.

(Read more by ordering your copy today: Chicken Soup for the Soul: Volunteering & Giving Back.)