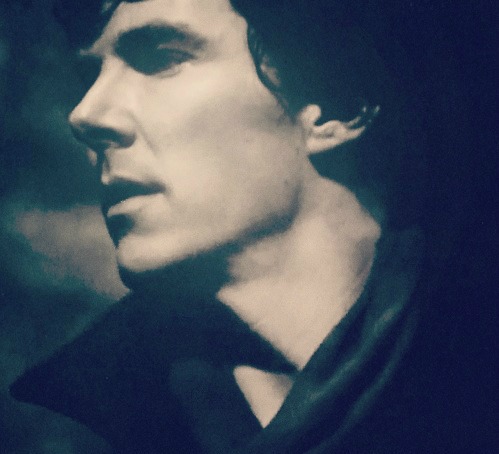 He was tall with gangly limbs and a graceful walk. Too-bright eyes darted with too much energy. Maniacal black hair and pale skin. Obscenely full mouth. But too skinny. Tired. Exhausted. Starving for information and wanted for different reasons by every woman at the London Library.

She only knew how old he was because she’d seen his license when he applied for his library card. Twenty. He was only twenty, and his name was Sherlock Holmes.

He often spouted sentence fragments at her. Whenever he spoke, addressed her that way, she ignored him for thirty seconds on purpose.

Luella’s co-worker Amanda—a lovely redhead right out of university—once said she wanted to “bang his voice,” if that was possible, and his voice was a very nice part of the overall package.

But it was his eyes—his freakish, cold, ice-like eyes—that made Luella’s stomach quake. Sometimes, Luella woke up at night, and her mind flowed over with images of avalanches and icebergs. 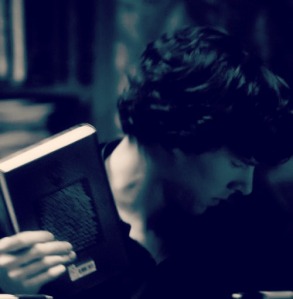 “Luella.” Hers was the only name he knew, because she was the one he used—had apparently chosen from all the other librarians as his slave.

“Mating cycle of African locusts, yes.” She adjusted a stack of leather bound books on her desk. “Amanda is not busy at the moment.” She gestured to the nearby redhead who leaned on a desk and looked to be imagining how to most efficiently remove Sherlock’s jeans.

“Mating cycle of African locusts. Please.” He tapped long fingers on the top of her desk until she stood up.

Her high, black, patent leather heels made no sound on the red carpet. Then, she clunked up the well-lit stairs of the library with him right behind her. He was always close. He sometimes felt like a shadow. There was nothing sexual about it. Factually, there was nothing sexual about Sherlock at all. He did not strut or wink or flirt. He barely smiled, and he was terse, rude.

Despite this, or perhaps because of it, he was the epitome of sensuality. The sound of his voice, the way he caressed book covers, how he looked not like a man but like a painting … he was unlike anyone Luella had ever seen.

She walked past stacks of biology books. “Why on Earth must you know about African locusts?” She paused and poked at book bindings.

“I just need to know.” He batted her hand away and found the book she was looking for. He pulled the book free from the shelf and turned away. He disappeared behind another row of books, but she heard the low rumble of his voice as he whispered to himself.

The lingering scent of stale cigarette was his “thank you.”

She overheard other women talking. Luella knew they resented her for being Sherlock’s worker bee, so they never talked to her about him; they talked about him when they thought she wasn’t listening.

“I’m going to ask him out. Do you suppose he knows what he looks like?” Amanda whispered, but whispers tended to carry in libraries.

“Absolutely. Not,” Terry said—a woman with a Master’s degree who always brought much younger men to holiday parties.

“How? How can he not know he’s beautiful?”

Luella wanted to speak up and tell them, “Because he’s too smart to care.” She didn’t. She went online and ordered a new book about Chinese death rituals instead—for Sherlock.

“Wouldn’t you love to peel off all those layers and bang him against a bookshelf?”

“Pull on that glorious hair …”

She cussed, loudly, when she realized he was standing above her desk, wearing all those layers her co-workers talked about. He always over-dressed, even in the summer—coats, scarves, like he was hiding something. She wondered if he was just a skeleton below the neck.

She stood up slowly and rounded the desk. She paused next to him, thinking.

“Are you all right?” he asked.

Luella looked up and noticed his eyes were bloodshot. Dark circles sat like tiny, purple pillows under his eyes, and his hair was wrapped in knots on his head. “Are you all right?” she replied.

(Read the rest of Luella’s experience with the young and very dangerous Mr. Sherlock Holmes HERE at FanFiction.net.)