I could go on and on about the awards. For example, both Matthew McConaughey and Jared Leto won Oscars for their performances in 2013’s Dallas Buyers Club. It was also nominated for Best Picture and Best Screenplay. We all know awards aren’t everything. In fact, sometimes, Oscars indicate a yawn fest. Not in this case.

Dallas Buyers Club is the based-on-a-true-story of Texas cowboy and rodeo man Ron Woodroof. Ron was a man’s man. In the opening scene, he’s banging two chicks while watching a bull rider get creamed. (Ur, no pun intended.) When he’s electrocuted at work, he gets taken to the hospital where he realizes he has AIDS.

Ron vehemently denies the diagnosis saying that AIDS is for “faggots,” and “he ain’t no faggot.” Interesting to me—and painfully sad—was how ignorant we once were of a disease that is now a worldwide epidemic. In the 80s, AIDS was the bane of homosexuals alone and could be passed on via toilet seat.

The treatments were equally ignorant, as portrayed in the film as Big Medicine shoves dangerous amounts of AZT down the throats of willing test patients to their detriment. Ron found a way around this. Originally given thirty days to live, he travels to Mexico and finds alternative treatments not approved by the FDA.

To save his life and the lives of others, he starts the “Dallas Buyers Club.” He’s not selling drugs; he’s selling memberships. Along the way, he befriends unlikely ally Rayon, a gorgeous, sweet, and uncouth tranny played by Jared Leto.

I have no clue how many pounds both McConaughey and Leto lost for their roles, but let me say they lost a lot. In the nude, they’re both almost feminine, delicate. It’s hard to believe where these boys began in high school faves like Dazed and Confused and My So-Called Life. Now, they are unrecognizable in their roles. McConaughey becomes Ron Woodroof, and Leto is literally a breast. Oscars well deserved. 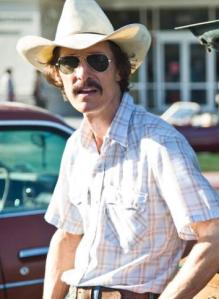 The message of the film has several different levels. On one hand, it addresses the massive problem that was and is AIDS. Even though we know more about it now, it’s still a terrible, tragic disease. Thankfully, last year was the lowest for reported new infections since the mid 1990s. Yet, millions, gay and straight alike, are still fighting a battle.

Secondly (and possibly the most angering issue addressed in Dallas Buyers Club) is the money monster that is the pharmaceutical corporations who seem to be in cahoots with the FDA. Ron Woodroof found a way to treat his illness, but since the FDA had not approved his methods, his treatments were taken from the people he was trying to save.

I’m sure the film tended a little toward propaganda on that front. I mean, Dallas Buyers Club made the FDA into complete toolbags. I hope it’s not as bad as portrayed, but maybe it is. I mean, doctors do want to feed us pills, and we take them without question, just like the AIDS patients who died in early AZT trials before doctors discovered proper dosing.

The question posed by this film: Does a patient have the right to seek any treatment they want, regardless of what a doctor or the government has to say? As a dabbler in both naturopathy and traditional medicine, I say yes. If people were more informed of alternative treatments, the world would be a different place. Last year, a friend of mine lived through a cancer death sentence not through chemo but through organic foods, vitamin IVs, and juicing. Ron Woodroof would approve.

I didn’t cry until the credits, and I’m not sure why. I felt despair at the hopelessness of so many AIDS patients. I felt anger at the FDA and the way our government is run (by the deep pockets of Big Medicine, apparently). And I’m not spoiling anything when I tell you Ron Woodroof is no longer with us.

When Dallas Buyers Club was over, I cried. Like so many other modern masterpieces (RENT, Angels in America), this film will stir you and remind you that you only get one life. Better do something with it.