Last week, we celebrated the veto of a ridiculous discrimination bill (SB 1062), which means (yay) I don’t have to leave the state. On a personal note, I received word that my first published work of 2014 will be my short story “Don’t Ball the Boss”—an audacious gay romance about a celeb and his PA. 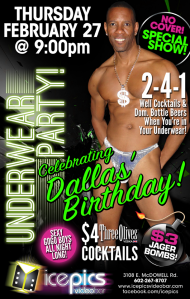 Finally, though (and come on, most importantly), last Thursday was Dallas Arizona’s birthday. I met Dallas a couple years ago. He’s probably the most famous gay guy in Phoenix and not only because he’s hot but because he’s sweet and he can dance. He dances often, all over the city, but my favorite venue for a good old Dallas time is at Ice Pics Video Bar on McDowell.

The place looks scary from the outside because there are no windows, and the front door is sort of hard to find. Whenever I’ve gone there, I’m one of the only chicks; seriously, you can hear crickets singing when I walk in the front door.

Ice Pics is dark on purpose. Inside, there are TV screens everywhere, playing clips of old musicals and current music videos. There’s a dance floor and stage. They have indecently cheap drinks. And despite the fact that my girlfriends and I are usually the only chicks, we feel welcome.

The thing I’ve realized about Ice Pics: you have to come prepared. The friendliness of its clientele can be truly overwhelming. Case in point: Thursday, Dallas’s birthday. As soon as I saw Dallas (who was wearing nothing but fluorescent yellow underwear stuffed with dollar bills, of course), I was wrapped in a huge hug and my picture was taken. I was introduced around, hugged some more.

I soon had gay boys circling me like friendly, smiling sharks. They wanted to talk about my outfit, my hair, my body, my lipstick. If you don’t take a complement well, do not go to Ice Pics. You will shrivel and pass out under the adoring scrutiny of the men inside.

When I go to Ice Pics, I feel like I’m on vacation—and, it seems, so does everyone else. There is long, loud laughter and sudden, unexpected stage performances by Dallas and his crew. One second, you’re outside talking to a strange, tall boy in multi-colored skivvies. The next, you’re inside, and Dallas is in a wig and glitter, dancing to the Bee Gees. Next, you’re on stage, too! You just never know.

Last week, we in Arizona celebrated the epic failure of a disgusting piece of legislature, but we also celebrated Dallas. I’m happy to know him, and I’m happy to live in a place with a pretty rocking gay scene.

3 thoughts on “We’re Going to the Gay Bar”