Saturday was my friend’s birthday. His request? A country bar. Jake and I knew of one, but we’d never been: Roman’s Oasis, on the outskirts of Goodyear. Roman’s is a famous (infamous?) country bar out in the Phoenix boonies. My Aunt Susie requested we go next time she’s in town, because it’s known—even in Ohio—as a priceless dive. So we went, and well, I gotta say: I might be a country girl. 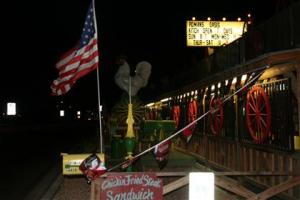 Roman’s is very much out of character for its neighborhood. One minute, you’re driving past mansions and a grocery store on Yuma Road. The next, you come upon a well-lit building covered in junk. Literally, junk: old wagon wheels, license plates, and a huge fake chicken. No, really, a HUGE FAKE CHICKEN. You gotta stumble through gravel to make it to the front door. (Stilettos not advised.)

Once inside, you’re overtaken with more junk, including pictures of men on horseback, signed dollar bills stapled to the walls, and buzzing beer lights. The place is huge and separated into two different bars. We quickly realized that straight ahead and to the left, people listened to country and did the two-step. On the right, people danced to hip-hop and wore backwards baseball caps.

We chose the country side, since my buddy was looking for a “country bar.” Roman’s featured a live band who looked the part—cowboy hats and boots. The dance floor was covered in couples dancing, and I quickly realized, shoot, I wanted to learn how to two-step! I grabbed the closest cowboy (with Jake’s permission, of course) and asked him to teach me.

Two-step is a lot like swing, so I like to think I caught on pretty fast. As beers emptied and shots were consumed, I became a regular dancing fool. I danced with a half dozen different dudes who spun me until I thought I might throw up all over their plaid shirts. 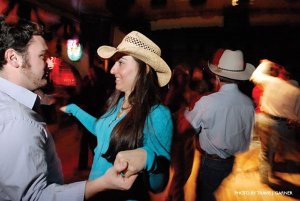 Did I mention the sweat? By midnight, what had once been a clean, attractive crowd had become a dripping, dirty mass of dancing insanity. By midnight, every shoulder I touched was soaking wet, but I’m not one to judge: I was a mess myself. Did I stop dancing? Nope. Well, once, but that was only because I really did think I was going to be sick, thanks to a country fellah who treated me like a spinning top.

There is certainly danger in going to Roman’s Oasis. The demographic is thoroughly mixed. Every race, age, and constitution was accounted for. I only saw one fight break out, but it stopped pretty fast. What do you expect when you mix cowboys with bikers with rappers with drunks? I guess that’s part of the allure of a dive bar: you never know what’s going to happen. One guy asked me if I wanted to go for a ride on his Harley. And hey, I learned how to two-step! You just never know.

I highly suggest a trip to Roman’s Oasis in the West Valley. I don’t care if you live in Scottsdale; you can sleep on my couch. The place is worth the drive, if only for one night spent surrounded by dancing and debauchery. And people say there’s nothing to do in Goodyear!

4 thoughts on “Let’s Go to a Country Bar”