Never, in a million, billion years would I have thought to replace Robert Downey Jr. in my heart. Then, I met Benedict Cumberbatch, and a new Sherlock Holmes was born.

Sherlock is a BBC production, featuring a modernized version of the famous Sir Arthur Conan Doyle mystery novels. The show was created by Steven Moffat and Mark Gatiss, well known for their work as writers on another acclaimed British series, Doctor Who. Basically, they were intrigued by the idea of a modern Sherlock Holmes, able to utilize technologies like cell phones and the internet to hone his sense of deduction.

Sherlock is played by thirty-four-year-old British actor Benedict Cumberbatch; silly name, sure, but this boy will now and forever be my Sherlock Holmes. Prior to Sherlock, he is best known for roles in Tinker, Tailor, Solider, Spy; War Horse; and Atonement (the film which convinced Moffat and Gatiss that Cumberbatch would be the perfect Sherlock).

Since the show’s enthusiastic reception by British audiences, Cumberbatch has become a household name overseas. He is quoted as saying, “I am very flattered. I have also become a verb, as in ‘I have cumberbatched the UK audience’ apparently.” Despite the fact that he’s not conventionally attractive, women respond quite nicely to dear Benedict, as evidenced by the Facebook and Twitter “Cumberbitches.” Tagline: “The most glorious and elusive society for the appreciation of the high cheekboned, blue eyed sexbomb that is Benedict Timothy Carlton Cumberbatch.” And okay, yes, I’m a member. The guy oozes charisma.

Dr. Watson, recently returned from war in Afghanistan, is played by Martin Freeman, who I first saw in Hitchhiker’s Guide to the Galaxy, followed by Love Actually. He’ll be playing Bilbo Baggins in the upcoming Hobbit series, and he is a perfect comic foil to Sherlock’s rude, uncouth, and egotistical behavior.

Other notable characters are, of course, Jim Moriarty (played flamboyantly by Irishman Andrew Scott). Moriarty is so twisted in his utter evil, and even though you gotta hate the guy, you have to like him, too, if only for his repartee with Sherlock.

So far, there have been six hour-and-a-half long episodes, divided into two seasons. Each episode title is a play on words based on the original Conan Doyle novels (for instance A Study in Scarlet becomes “A Study in Pink”). The relationship developed between Sherlock and Watson is stellar, and the mysteries are never easy to unwind. The acting is a certain strong point, but so is the rapid dialogue. Jake and I needed subtitles, and frankly, it was hard even then to keep up with Sherlock’s mile-a-minute discourse. 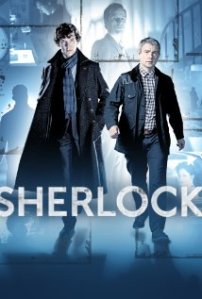 Comedy mixes effortlessly with violence and drama. In fact, one of the most interesting aspects of the show is how badass and violent these two pale, British boys can be. Watson is a sharpshooter with perfect aim, and Sherlock is just as willing to give a fist to the face as shake a hand.

There is never a dull moment in this BBC masterpiece—just another example that Europe is winning the battle for entertainment quality. Yes, there are already talks of a season three, set to start filming in March of 2013, since both Cumberbatch and Freeman are currently working on other projects. That means I will obsessively watch the only six episodes I have over and over, because I can’t get enough of the characters, the writing, and the ever-present comic undertones of this, my new favorite show.

3 thoughts on “I Am Sherlocked”