I randomly heard about Suzanne Morrison via an email from a writers’ group buddy. Suzanne’s new book trailer was featured on “Funny or Die.” As soon as I saw the trailer for Yoga Bitch, I decided Suzanne was FUNNY and that I had to read her book. Being the yoga enthusiast and writer that I am, she seemed like my kind of gal. Well, I finished the book, and Suzanne is my kind of gal. The full review of Yoga Bitch will follow next week, but in the meantime, meet author Suzanne Morrison—one hell of a cool chick and an incredible writer. 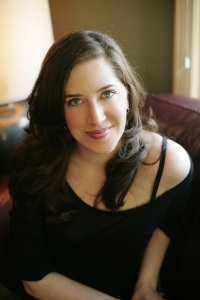 About Suzanne Morrison: Yoga Bitch: One Woman’s Quest to Conquer Skepticism, Cynicism, and Cigarettes on the Path to Enlightenment was published in August of 2011. The book had its start as a long-running one-woman show of the same title, which played in New York, London, across the country, and around the world. Suzanne is currently developing a new show, Optimism, about her adolescent fascination with Ted Bundy, who was a friend of her parents, and she’s at work on a new memoir, Your Own Personal Alcatraz. You can find Suzanne at the Huffington Post, where she blogs about the reading life, and at her own blog, where she writes about absolutely everything she’s reading, writing, and rehearsing. Also, be sure to visit her website: http://suzanne-morrison.com/.

And now … An H and Five Ws with Yoga Bitch Author Suzanne Morrison!

How did you first get involved in yoga?
I literally just walked into a studio on a dark night when I was twenty-five and feeling lost. I don’t have any memory of why I chose the studio I did, or why that night was the night. I only remember going through that first class (taught by my teacher, Indra, who I followed to Bali) and feeling like I’d found something I had been looking for without realizing it. I literally felt like I had found a home. It’s amazing to me that now, ten years later, I still feel that way when I go to a yoga class. Who would have thought?

Who has inspired you most in life?
I’d have to say my parents. They have never stopped learning, never decided they knew enough about themselves or the world and could now sit back and watch TV. They are constantly learning new things, reading new books, changing their minds, thinking of things from new perspectives. I think age is something to fear only if you lose your curiosity. When I think of myself at seventy or eighty, I picture myself following in their footsteps, and I get kind of giddy thinking about how many good books I will have read by then.

What book should every aspiring yogi read?
Good question! I suppose it’s obvious, but the Yoga Sutras. I’m partial to Satchidananda’s translation, but I’m sure there are many other great ones out there I haven’t yet come across. That book is such a great manual for living. As for yoga memoirs, I adore Christopher Isherwood’s My Guru and His Disciple. It’s a pretty densely packed, extremely honest memoir of Isherwood’s spiritual life. He practiced bhakti yoga, hardly any asana at all, though there are some very funny stories about his brief foray into asana. And Isherwood was one of the best writers of the twentieth century, so naturally it’s very nicely written.

Non-yoga books that every yogi should read? Everything Rilke wrote, starting with Letters to a Young Poet and then moving on to his poetry. If you want to move into your heart, Rilke is an exceptionally good guide.

Where do you feel most at peace?
Well, I’m least at peace when I’m not writing, so I guess I’d have to say: when I’m writing. Writing isn’t exactly a peaceful activity, but it requires complete concentration to do it even somewhat well, and as every yogi knows, concentration is a gateway to peace of mind.

I often feel at peace in yoga, at the end of class. But sometimes during class I’m thinking about people I want to punch, or stupid asinine things I said twenty years ago. I love that moment in a class when I realize I’ve dropped all that and am finally concentrating on the poses. I don’t think I’ve ever left a class without having done that.

Jeez. Yoga is awesome. Ha! (I haven’t made it to a class in two weeks due to holiday familypalooza, but I am going back to class tonight. I want to write a love letter to yoga, I’m so excited about it.)

As a writer and performer, when have you wanted to give up … and what stopped you?
Amazingly enough, I have never wanted to give up writing. I give up performing all the time, but performing is a compulsion, so I keep coming back to it. But I can’t think of a single time I’ve wanted to quit writing—even when it seemed kind of juvenile still to be holding on to the dream of being a writer, even when my first novel was rejected. I simply have never wanted to do anything else.

I would say the closest I’ve come to despair had more to do with publishing than writing, because trying to get published, and then being published, is a very hard business. Rejection, mean reviews, and this online world that I have to constantly avoid: Goodreads, Amazon reviews. I envy writers who published before the internet made it possible to read every single thing readers think of one’s book! And the rejection never ends. The unkind reviews will never end so long as one has the good luck to keep publishing. And so the writing must be the most important thing. I learned that this fall after my book tour. It was so much fun to meet readers and do interviews and to travel, but at the end of the day, the most important thing is a very private thing: it’s me, sitting down every morning in a quiet room to put words on the page. Everything else—publishing, enduring rejection, self-promotion—is a means to this end.

Why do you write?
I don’t know. It was never a choice; it was just something I started doing the moment I could pick up a pen. Maybe it’s because I had three siblings and writing is a sneaky way to get a word in edgewise. Maybe it’s because I’m slightly mentally ill. I really don’t know. I do know that, while it’s a messy business, I’m very grateful that I get to write. It is so difficult, but being able to express the experience of being alive is a great gift I want to be worthy of. I think I would explode if I had to keep it all inside. (There you go. Maybe that’s why I write; because I would explode if I didn’t.)