Banned Books Week is September 24th through October 1st this year. Every year I make note of this, because to me, censorship is one of the world’s major evils—especially in regards to literature.

During the last week of September every year, libraries and bookstores around the US draw attention to the problem of censorship by mounting displays of challenged books and hosting a variety of events. Banned Books Week is the only national celebration of the freedom to read. And what a freedom it is! The event was originally launched in 1982 in response to a surge in the number of challenges to books in schools, bookstores, and libraries. I like to think that by celebrating Banned Books Week, we fight the uber-conservative, ignorant folk who live in a fantasy world where everyone is straight, nobody drinks, and we all love each other.

Here are a couple of my favorite Banned Books and the arguments against them:

The Awakening by Kate Chopin
According to the Citizens for Literary Standards in Schools: “Parents should be aware of content such as adultery (with no remorse), suicide, and extreme sensuality. It is a dark, depressing book.” Dark? Sure. Ground-breaking. Definitely. It’s about an eighteenth century woman, who wakes up and realizes women don’t have to be locked in the kitchen, raising kids. Women can have jobs and social lives outside the home. They can also enjoy sex. What a horrendous idea. 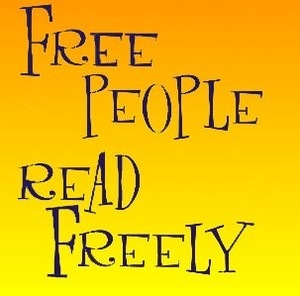 To Kill a Mockingbird by Harper Lee
An eighth grader from Stanford Middle School in California spearheaded a campaign to remove Lee’s Pulitzer Prize-winning novel from his classroom. He was uncomfortable with the use of racial slurs. It’s Huckleberry Finn all over again. Poor kid didn’t read enough of this masterpiece to realize the racial slurs aren’t glorified; they’re examples of inequality, utilized by Harper Lee to make a point. Mark Twain would agree. Let’s just hope this eighth grader doesn’t run for office someday.

Harry Potter series by J.K. Rowling
Witchcraft, Satan worship, blah blah blah. Don’t get me started. It’s about good versus evil and the importance of friends. Are we going to censor Lord of the Rings next? Don’t get any ideas.

I haven’t read the next one, but the argument blows my mind:
GLBTQ: The Survival Guide for Queer and Questioning Teens by Kelly Huegel
One of fifty-five books that parents in Fayetteville, Arkansas, are petitioning to have removed from school libraries. (Fifty-five. Can you imagine?) The parents, who formed Parents Protecting the Minds of Children, have accused the librarians and other opponents of their efforts of promoting a “homosexual agenda.” Yes, because it’s so easy being gay in high school. Sign me up. Heaven forbid we help troubled kids get through tough stuff.

On a personal note, every year about this time, I get an inkling to read Fahrenheit 451 again. Thankfully, it has yet to make the Banned Books List. (Wouldn’t that be ironic?) I also like to pay homage to organizations like the Citizens for Literary Standards in Schools and Parents Protecting the Minds of Children, because thanks to you people, banned books sell more copies. Every time a book is “challenged,” bookstores sell out of it, so thank you for inspiring kids to read! I also hope that someday a book of mine makes the Banned Books list. That will mean I’ve truly made it as a writer.

How will you get involved this year? Libraries and bookstores throughout the country often stage local read-outs as part of their activities. But this year, for the first time, readers from around the world will  participate virtually in Banned Books Week. During this year’s celebration, readers will be able to proclaim the virtues of their favorite banned books by posting videos of themselves reading excerpts on a dedicated YouTube channel. For details about this, visit: http://www.bannedbooksweek.org/virtualreadout. Now go get one of the “bad” books that the “good” people don’t want you to read. Be a rebel. It’s your right to read something worthwhile this week! 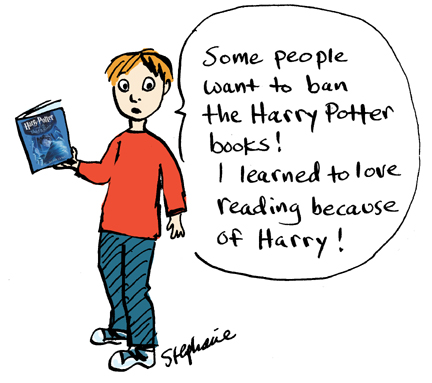