On my first walk through downtown Charleston, I looked like a tourist. I had a brand new map in my hands and a camera around my neck. About a half dozen strangers came up on the street, asking if I was new in town. (I should have just written “OHIO” on my head and gotten it over with.) After three hours of walking, I couldn’t believe I was lucky enough to live here. I was terrified that I would wake up, and it would be snowing. I would wake up, and the skies would be gray. I didn’t wake up, though; I really had moved to Charleston, SC, and it was official—I was in love.

After my three-hour trek on that very first day, I was hungry. I wanted to eat, but in a city full of food, where was I supposed to EAT? It didn’t take long for me to find Market Street, and then, there it was: Mistral. I could already smell French food, so I didn’t glance at the menu. No, I just stepped up the huge front step (treacherous in heels, may I add), and I found Paris. 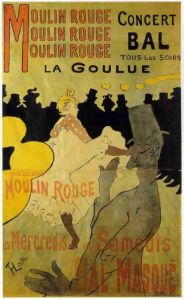 Mistral looks like it should be in a foreign country. The walls are covered in paintings by Toulouse-Lautrec; above the bar is a mural of women in petticoats. The tables are hidden beneath bright white tablecloths. (Their bleach bills must be excessive, but it’s a nice touch.) When you sit at the tables, you feel sort of off-balance, as if one of the delicate chair legs may bend beneath your weight.  This is either because of the highly trafficked hardwood floors or because, as I said, you feel like you’re suddenly in a foreign country, and you have no idea how you got there.

The place is owned by a French woman and her Irish husband: Francoise and Peter Duffy. I met them both when I ate there for the first time, and she refused to speak to me in English. (My French was rusty, to say the least.) So the joke goes, she gives her husband one day of the year as proprietor of the restaurant—St. Patrick’s Day. The rest of the year belongs to her. For me, she is a woman to be admired, and I think her husband agrees.

If you need help picking out a bottle of wine, talk to the head bartender. He knows his stuff, and the man is there so often, I have a sneaking suspicion that he lives at Mistral on a cot on the second floor. Live jazz plays just about every night of the week. They’ve found some of the most talented people in Charleston to sit on their tiny corner stage, right by the front door, and there’s nothing better than digesting to Thelonious Monk.

Mistral is a real French restaurant, combining Provencale and French classical cuisine with SC Lowcountry. Some of my personal favorite-not-to-be-missed-you-WILL-drool-on-the-table choices:

She Crab Soup: A Charleston standard, this is a rich soup (similar to bisque) made of heavy cream, crab meat, and crab roe (EGGS!), with a splash of dry sherry. It’s practically a dessert.

Pate Maison: This is their house pate of rabbit and pork with comichens and Dijon mustard. Sure, it’s rich, but spread it on the crisp, fresh bread, and you’ll be asking for seconds.

Saumon Tartare: Fresh salmon, cured salmon, onions, capers and vinaigrette with toast points. A dish that reminds you, you really are right next to the ocean.

I could go on and on about this place, but really, do I need to? You’ve already decided to go, haven’t you? To see their full menu and read a bit about the place, visit http://www.mistralcharleston.com/. See you there; I’ll be sitting at the bar.

2 thoughts on “French food on the Market”